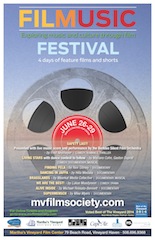 The second annual Film and Music Festival will be held the weekend of June 26-29 at the Martha's Vineyard Film Center. The four-day festival will include features and short films, an opening-night reception on Friday, social gatherings, as well as live music, and post screening Q&As with special guests.

The opening night film, Safety Last will be presented with a live music score and performance by the Berklee Silent Film Orchestra. Based at Boston’s Berklee College of Music, in the world’s only undergraduate degree program in film scoring, the student orchestra is dedicated to composing new original scores for silent features.

Also being screened, Dancing in Jaffa is an inspirational film about the power dance has to overcome political and cultural difference in Israel. An opening night reception will start at 7 p.m. in the Martha's Vineyard Film Center lobby followed by Living Stars, a quirky point-and-shoot film that is an all-ages dance party of everyday people dancing their hearts out in their everyday setting. That will be followed by a dance competition on the film center stage.

Friday night closes with Finding Fela, a look at the life and music of Nigerian singer Fela Kuti, the father of the Afro-beat movement.

Saturday’s lineup starts with We Are The Best, a joyous celebration of youth, friendship and rebellion centered around three young girls trying to start their own band. Then Mateo captures the story of America’s first white mariachi singer, and the long journey he took to get there. Director Aaron Naar will be joining us for a Q&A via Skype from Los Angeles.

Saturday night closes with Brasslands, a documentary about a tiny Serbian village exploding with brass cacophony and riotous celebration as hundreds of thousands of music fans attend the world’s largest brass instrument competition.

On Sunday, Alive Inside will be screened at 4 p.m. with special guests from the Martha's Vineyard Film Center for Living and Windemere discussing their music and memory program. The premier of the short film Marvin and Saralee, produced on-island precedes the feature film.

At 7:30 pm Supermensch: The Legend of Shep Gordon, directed by SNL alum Mike Myers, tells the story of the music manager’s legendary life in the uber-fast lane of Hollywood and then his transition to Buddhism.

Tickets are $12 each per movie ($9 for Martha's Vineyard Society members); a festival pass for the long weekend is $75 (members pay $60).

For more information, or to buy tickets or passes go to www.mvfilmsociety.