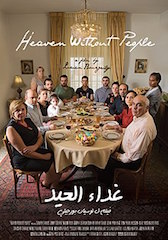 As the oldest and largest-running festival of Arab films and filmmakers in North America, the Arab Film Festival annually spotlights as many as 70 films from more than 28 countries, including 15 Arab countries. This year’s festival runs through October 21.

Heaven Without People (Ghada El Eid) is Lucien Bourjeily’s first feature film and has received noteworthy acclaim as an audience favorite around the world. The film follows Josephine, the matriarch of a sprawling family, whom is delighted to gather everyone for Easter lunch for the first time in two years. While they all share a joyful meal, an incident ignites underlying tensions between the family members and leads them gradually into chaos.