Loud Minds has partnered with the award-winning visual effects studio Milk to create many of the effects on the newly commissioned eight-part NBC series, Surviving Earth. A co-production between UK Indie Loud Minds and Universal Television Alternative Studio, the documentary series promises an incredible journey into prehistory to learn the lessons from past mass extinctions. The partnership will see Milk develop and create all the digital environments, landscapes and creatures that will bring the series to life. 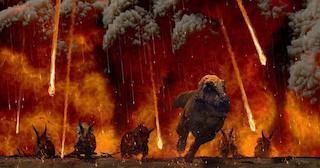 Led by Emmy Award-winning VFX supervisor Jean-Claude Deguara, Milk is working on a broad range of creature and environment work, designed to transport viewers back in time to a vibrant lost world where meteors fall, super volcanoes erupt, seas boil and the land moves.

The creative partnership marks a reunion between Loud Minds creative director Tim Haines and Milk’s Deguara. They previously collaborated on the ITV series Primeval and the immersive experience Dinosaurs In The Wild.

Deguara said, “It’s great to be collaborating with Tim once again after helping his vision come to life for our previous project Dinosaurs in the Wild. We can’t wait to bring together our talented team of VFX artists to combine the worlds of technology and creativity and produce some epic creatures and environments for this incredible story of the evolution of life on earth.”

“I’m delighted to be working with Jean-Claude again on this spectacular story that celebrates the power of Life on our ever-changing Earth,” said Haines. “We know Milk’s creative team will produce the highest calibre of visual effects to tell this important environmental story that will also help us understand our futures.”

Milk executive chairman Jag Munid added: “We’re very excited to see Jean-Claude and our creative team begin work on such an epic project in Surviving Earth. Milk has built a strong platform for growth, significantly increasing its capacity and creative talent base - positioning itself well to add a project of this quality to its roster.”

Milk is currently also in production on the upcoming Sony feature The Woman King from director Gina Prince-Bythewood; the Netflix feature Me Time; Working Title’s features The Swimmers and What’s Love Got To Do With It; the Amazon feature Your Christmas Or Mine and Amazon Studios/ Left Bank Picture’s episodic series Three Pines.

Surviving Earth will be available to stream on Peacock and will begin production later this year.