Lola, a powerful female boxing feature film, has been accepted into the American Black Film Festival, which continues its 24-year legacy of providing a platform for diverse storytelling and emerging filmmakers. The festival is scheduled to take place online on August 21-30 at http://www.abff.com 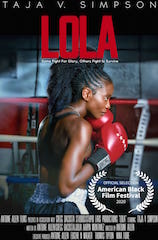 In sticking to its mission of offering a platform for diverse voices in cinema, ABFF showcases web series and films to a record number of attendees through its narrative, documentary, web series, and HBO Short Film Competition. The slate will boast an array of genre's surrounding the black Diaspora and feature a multitude of emerging arid veteran filmmakers. Each of this year's selections tackles topical issues including, survival, violence, parenthood, health, love, forgiveness, mental illness, and friendship.

Written and directed by Antoine Allen, Lola is an upcoming movie based on fictional characters. It's an uplifting production on how Lola transformed her personality from being harassed to being a champion. Allen tells the inspiring story of Lola’s struggles, her triumphs, and her discovery of her talent, power, and voice.

"It is our pleasure to be accepted into the American Black Film Festival,” said Allen. “The film showcases how determination can lead to high achievement.”