ATIF Holdings Limited, which provides business consulting and multimedia services in Asia, today announced that the cinemas of its majority-owned subsidiary, Leaping Group, a leading multimedia and advertising firm in Northeast China, are ready to resume operation. The company added that it expects a strong post-pandemic rebound from its cinema business as China allows theatres to gradually resume operations starting today. 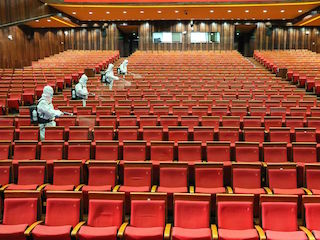 Leaping Group runs a cinema chain with four movie theatres, most of which are in Shenyang. Cinemas in the city are waiting for an official document from regulators as well as for the new films to be released and distributed to the local theatres in order to fully operate as normal. Leaping Group is also the exclusive advertising agency for China’s Leaping cinema chain operator Wanda Cinema in the Northeastern region. Its advertising network covers more than 100 movie theatres that span across 22 cities with more than 1,000 screens. In addition, Leaping Group controls advertising resources at over 100 local supermarkets in Liaoning province, which work to connect and efficiently target different groups of consumers.

Bo Jiang, chairman of Leaping Group said, “We are enthusiastic about resuming operations of our cinemas and partnering with ATIF to continue accelerating the growth of Leaping Group to begin the next chapter for rapid expansion. Leaping Group is expecting to increase another eight new theatres by the end of this year, which together are estimated to yield a box office of over 80 million renminbi in total.

“Leaping Group is the strongest brand in pre-movie advertising in China’s Heilongjiang, Jilin and Liaoning provinces and our revenue during the 2019 fiscal year has reached over $11 million, with 90 percent of which generated from advertising-related business. Most of Leaping Group’s previous clients have extended their collaborations with us even before the theatres are back to operate in full swing. About 65 percent of our advertising slots are pre-booked because our clients are very confident about cinema advertising.”

“By acquiring a controlling 51.2 percent stake of Leaping Group in April this year, ATIF aims to leverage Leaping Group’s expertise in multi-channel advertising, event planning and execution, as well as in film and television program production to significantly boost growth of its multimedia business, which is one of ATIF’s new strategic initiatives to help drive shareholder values. We will expand our capacity to meet increasing market demand for multimedia and diversify our portfolios,” said Jun Liu, CEO and director of ATIF.