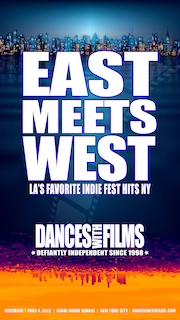 Dances with Films New York will take place at the Regal Union Square from December 1-4.

Festival founders Leslee Scallon and Michael Trent recognize that New York City is the artistic, cultural and creative epicenter of the country and the perfect city for Dances with Films. The indie film event will showcase over 70 never-before-seen short, documentary and feature films.

Inspired by the bright lights and immersive theater found in NYC, the festival will kick off opening night with Broadway influenced film Beau, directed by Josh Rhodes, and starring Jeb Brown and Matt Rodin. Beau is a musical drama about a struggling musician who discovers the grandfather his mother intended to keep a secret, a man who forever changes his life by putting a guitar in his hand, and self-love in his heart.

Feature films include Double Down South written by Academy Award winner Tom Schulman (Dead Poets Society) and Bone Cold starring Jonathan Stoddard (The Young & The Restless) and Trinity Bliss who is confirmed to star in Avatar 2, 3 and 4.

Dances with Films advocates for diversity and inclusion in film and has selected a film slate with topics including women’s rights, the war in Ukraine, religion, concentration camp survivors, mental health, LGBTQIA+ issues, conversion therapy and more.

In a statement the co-founders said, “We are so excited to be expanding our unique brand of curated films to the city that never sleeps. Giving exposure to new films and filmmakers is what Dances with Films has always been about a true discovery film festival, what Sundance was supposed to be.”