As part of Kodak’s ongoing efforts to support the motion picture film infrastructure, the company has appointed Christian Richter to the newly created role of film lab and studio relationship manager, effective immediately. Richter will be responsible for developing and managing strategies to optimize the workflow between studios, filmmakers, laboratories and post-production facilities. He will report to Andrew Evenski, Kodak’s president and general manager of the company’s Entertainment Imaging division. 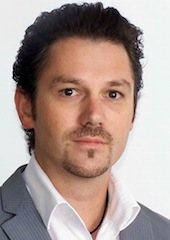 “There is a growing concern that the changes occurring in the industry will be detrimental to the motion picture film infrastructure, and we want to alleviate that concern,” said Evenski. “There is a thriving, global lab network and many filmmakers are choosing film. Christian has more than 15 years of extensive, international experience to contribute to this new role. He will liaise with our customers and promote the options for shooting anywhere in the world, utilizing the high-quality film system in place to support those productions.”

Since joining Kodak in 1997, Richter has worked solely in the Entertainment Imaging division, fulfilling roles on an international scale. His responsibilities have ranged from managing the business unit’s initiatives for students, film schools and emerging filmmakers in Germany, to general management of Kodak’s Cinelabs in Dubai and Bulgaria. After developing broad international sales experience over several years, he became an integral part of Kodak’s product development and innovation advocacy teams, working with R&D scientists to drive product quality and growth. His business acumen includes a skill set for overseeing people, projects, products and industry partnerships.

Richter is currently the business manager for Europe, the Middle East and Africa, a title he’ll maintain as he embarks on his new responsibilities. Previously, he was the business development manager for Western Europe.

“I want to make it as easy as possible for filmmakers to shoot on film, regardless of where they are shooting around the globe,” said Richter. “Filmmakers do not have to shy away from using film because of uncertainties around the availability of laboratory services. That infrastructure is in place. At the same time it will be exciting to work with the lab community, ensuring their services are well promoted within the industry.”