Cinionic, the Barco cinema joint venture, will be the exclusive laser projection provider for Kinepolis. The replacement of hundreds of existing and new screens with Barco laser projectors will take place over the next three years across Western Europe and Canada. 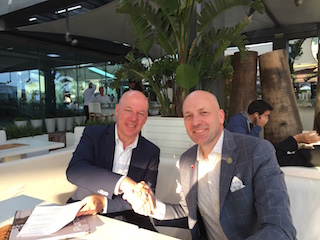 “After fantastic results from our earlier Barco laser projector deployments, we’re excited to strengthen our partnership with Cinionic and roll-out laser to new theaters and other existing sites,” said Eddy Duquenne, CEO of Kinepolis. “As a pioneer for many of the Barco’s cutting-edge cinema technologies we are proud to offer our customers the ultimate movie going experience they’ve come to expect from us. And what’s more, Barco laser projectors provide superior image quality, while saving energy compared to Xenon based projectors.”

Kinepolis was the first exhibitor to launch an all-laser powered by Barco cinema complex in Europe in August 2016, with the opening of its 10-screen theater in Breda, the Netherlands.

“We are honored that our long-term cinema partner Kinepolis has chosen Barco laser as their exclusive projection technology to expand their international footprint in premium cinema,” said Wim Buyens, CEO of Cinionic. “It is our fondest desire to empower Kinepolis with a full complement of cinema experiences that help them differentiate their entertainment offering for today’s moviegoers.”