Director Brian Hollars' short film boy about the families affected by Hurricane Katrina will premiere at the New Orleans Film Festival in October. 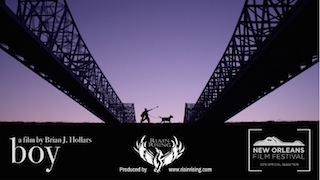 Declan Ryan, head of Riain Rising, supported Hollars by providing packaging and promotion services, and helped him run a IndieGoGo campaign to assist with festival submission costs.  The film has garnered community support from those affected by the historic storm, as well as from fans compassionate towards Katrina survivors.

Ryan said the Katrina connection was a big part of his decision to support the filmmaker. ”It reinforced our passion to push this powerful independent project forward,” he said. “The families affected by these disasters need our support to complete a full recovery and if their stories aren't told, they often disappear."

After its festival run, boy will be available online for a small purchase price, with a percentage of proceeds benefiting 2016 Louisiana Flood victims.