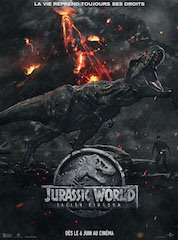 This news comes as the film continues its run across 71 territories, opening most recently in Japan with the highest opening weekend 4DX occupancy rate of 84 percent. Jurassic World: Fallen Kingdom has grossed more than $27 million in box office to date in 4DX.

In a record-breaking year for the 4DX format – featuring choreographed seat movements, vibrations and environmental effects tailored for each key aspect of the film – several blockbuster movies have generated one million or more attendees. In a significant milestone, Jurassic World: Fallen Kingdom has doubled those audience numbers with its 4DX release.

“The Jurassic World franchise is an excellent fit to be formatted into 4DX because of the wild action as the stars are chased through the jungle and eventually through the city,” said Byung-Hwan Choi, CEO of CJ 4DPlex. “Our skilled producers presented an amazing version of the blockbuster film, tapping into the full capabilities of what 4DX has to offer, allowing moviegoers to experience the most premium theatrical technology available today.”

Choi said, “We are excited to see our relationship with Universal continue to grow with more successes in the near future.”