iWoman TV has partnered with New York Women in Film & Television and Go Indie TV to showcase the work of female filmmakers and content creators through the 4th Annual NYWIFT Online Shorts Festival. Submissions are being screened throughout the month of January on iWoman TV and Go Indie TV. 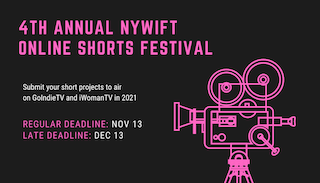 New York Women in Film & Television was founded in 1977 by a handful of women who saw a pressing need for a networking and educational forum for women within the entertainment industry. Over 40 years later, NYWIFT’s diverse membership is now more than 2,500 strong, and is made up of women and men who work in all aspects of television, film and digital media.

This year marks the first time NYWIT is partnering with iWoman TV, a digital streaming service created “by women, about women, for everyone," to highlight the accomplishments and talents of women through the lens of female storytellers, producers, directors, photographers and editors.

The newly launched OTT and website, which is still in BETA, is the brainchild of Emmy Award-winning journalist, producer and actress, Cathleen Trigg-Jones (Madam Secretary, Ray James, House of Cards), who said, “iWoman TV is not just another network, but a movement to change the trajectory of how women and girls are portrayed on television and in film, by owning our stories and pushing for greater representation in front of, and behind the camera.”

New to the NYWIFT Shorts Festival this year, iWoman TV is offering an opportunity to the winner of each submission category with the Viewers’ Choice Award. iWoman TV viewers will have the chance to vote on the winners of each category throughout the month of January by liking their favorite short film or show. The submission with the most likes will receive a $2,000 cash award, and a one-year exclusive agreement with iWoman TV to air their work.

In celebration of Women’s History Month, iWoman TV is planning a soft launch in March, featuring a newly designed website and App, with a full launch planned later this year.

“Women have been forces of change throughout history,” said Trigg. “We have been trailblazing icons who fought against slavery and won the right to vote. We have marched for Civil Rights and against sexism in all its forms. Through sheer will and determination, in the face of sometimes brutal odds, women have been the driving force demanding a more just society. The iWoman movement is a clarion call to action reflected in content that empowers women to soar unhindered to their limitless potential.”

In addition to housing a growing library of female-centric films, series, talk shows and the iWoman News, Business & Entertainment Report, the iWoman TV website features blogs and a portal for female content creators to upload and stream their own content as well as host watch parties.