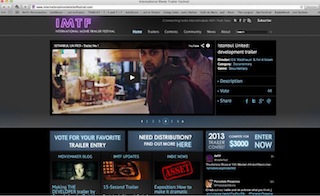 The decision to see—or not to see—a movie often rests on the film's trailer. No wonder that moviemakers invest a great deal of effort to create previews that grab our attention and make us want to see more. Now in its fourth year, the International Movie Trailer Festival celebrates the art of the indie trailer. One of the world's leading online film festivals, IMTF exhibits trailers promoting movies in all genres. The festival also includes trailers for web series and books. The deadline for entering the festival is November 21.

While the majority of entries come from the U.S. and Canada, to date this year's festival has drawn trailers from 20 other countries including Argentina, England, Finland, France, Germany, Italy, and Russia. Examples include trailers for a documentary about the recent protests in Turkey, a science fiction web series about solar flares, and a psychological thriller.

"About a quarter of the trailers are for movies still in the dream stage," says IMTF's co-founder Roberta Suid. "These faux trailers aim to raise money for the actual production." Usually made on a shoestring budget, a preproduction trailer shows potential backers the moviemaker's skills. "More and more you're seeing faux trailers used on crowdfunding sites such as Kickstarter and IndieGoGo," Suid said.

One of the Festival's goals is to support artistic and technical experimentation. Suid explains, "This year we're offering a special prize for the best trailer shot using a mobile device. Another award is given for the best micro-trailer. That's a preview running 15 seconds or less."

A jury of industry professionals chooses the $3,000 grand prizewinner. The People's Choice Award is determined by thousands of fans voting online. Past winners have used their awards to gain the interest of Hollywood producers.

As part of its educational effort, IMTF's site includes practical tips about video production. The Festival's homepage Moviemaker Blog features behind-the-scene narratives by the indie filmmakers participating in the contest.

Current entries can be viewed at the festival's website: www.internationalmovietrailerfestival.com.