Disney•Pixar’s Incredibles 2 will be available on the TheaterEars app, enabling moviegoers who prefer Spanish to enjoy it at movie theatres across the US and Puerto Rico. 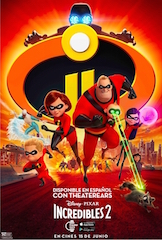 TheaterEars is an iOS and Android based app that enables moviegoers to experience a movie in Spanish at the movie theater in real time using their Smartphone and earbuds. Founded in Boca Raton in 2013, the company seeks to break the language barrier for moviegoers and is currently available for selected major motion pictures in the United States and Puerto Rico. Previous films released include: Coco, Solo: A Star Wars Story, Jumanji, Rampage, A Quiet Place, Overboard, Pacific Rim Uprising, and Steven Spielberg’s Ready Player One.

“The Incredibles team at The Walt Disney Studios has been a joy to work with,” said TheaterEars CEO Dan Mangru. “They produce high-quality content that moviegoers demand to see.”

“Once again, we are proud to work with TheaterEars to provide a first-class experience to our Spanish-speaking moviegoers,” said Paul Holliman, vice president – sales, central region at Walt Disney Studios Motion Pictures.