Disney Pixar’s Incredibles 2, voted the most anticipated family movie of 2018 in a Fandango moviegoer survey, is now strutting its pre-sales super powers on Fandango.  Opening in theaters on June 15, Incredibles 2 is on pace to become Fandango’s biggest animated pre-seller of all time and one of the summer’s biggest hits. 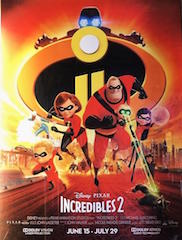 The film is out-pacing the current animated pre-sales record-holder on Fandango Finding Dory, at the same point in the sales cycle, along with other summer blockbusters from the past two years, including Wonder Woman, Spider-man Homecoming, and Suicide Squad.

"Fans have been waiting over a decade to see the return of Pixar's most beloved heroic family, and those years of anticipation are leading to record-breaking advance ticket sales for Incredibles 2,” said Erik Davis, Fandango managing editor. “The film is already receiving terrific early buzz, and with summer vacation in full swing for many kids, Incredibles 2 is poised to become one of season's biggest hits."