Imagine I’m Beautiful to Premiere at NYCIFF May 30 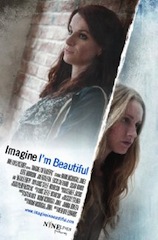 Nine Lives Pictures and the New York City International Film Festival today announced the New York premiere of Imagine I'm Beautiful on May 30 at The Crosby Street Hotel. The event begins with a red carpet screening at 7 pm, followed by a general admission screening at 9 pm. http://www.imagineimbeautiful.com

"We're thrilled to showcase this incredible, thoughtful, award-winning film at this year's festival," Roberto Rizzo, founder & CEO, NYCIFF said. "Imagine I'm Beautiful captures the spirit of independent filmmaking and the team represents some of the most talented up-and-coming filmmakers in the New York City independent scene."

Imagine I'm Beautiful follows Lana, a young woman who moves to New York after her mother's suicide. She moves in with the troubled Kate and the two slowly forge a friendship, finding solace in each other's difficult pasts until Kate makes a discovery that will alter their friendship for good. The film stars Naomi McDougall Jones and Katie Morrison, is directed by Meredith Edwards and produced by Caitlin Gold, Naomi McDougall Jones and Joanna Bowzer. The film was developed and produced in New York City.

"As we were looking for a home for our New York-premiere, NYCIFF was top of our list," Caitlin Gold, producer and co-founder, Nine Lives Pictures said. "The whole cast and crew are excited to be a part of such a filmmaker-friendly, prestigious festival as we bring this film to our home town of the Big Apple."