The Hollywood Professional Association has announced that Victoria Alonso, producer and executive vice president, production for Marvel Studios, will receive the organization’s 2018 Charles S. Swartz Award at the HPA Awards on November 15. 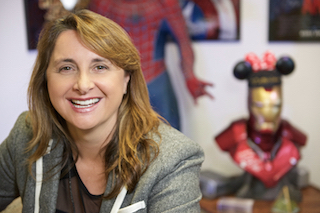 The HPA Awards recognize creative artistry, innovation and engineering excellence in the professional media content industry and the Charles S. Swartz Award honors the recipient’s significant impact across diverse aspects of the industry. The HPA Awards will be bestowed at the Skirball Cultural Center in Los Angeles, California.

A native of Buenos Aires, Alonso moved to the U.S. on her own at the age of 19.  She worked her way up through the industry, beginning as a production assistant and then working four years at the VFX powerhouse Digital Domain. She served as visual effects producer producer on a number of films, including Ridley Scott’s Kingdom of Heaven, Tim Burton’s Big Fish, Andrew Adamson’s Shrek and Marvel’s Iron Man.

Seth Hallen, president of the HPA, said, “We are honored to present The Charles S. Swartz Award to Victoria Alonso, whose work and accomplishments are impressive by any standard. This honor is given after thoughtful consideration, and only when the board and the awards committee feel that there is a worthy and undeniable recipient. Victoria’s career trajectory has shown her talent, perseverance, and brilliance. She has brought recognition to her craft and to women who work in this industry and is richly deserving of the Charles S. Swartz Award.”