Recently DP Tom Guilmette took on an assignment at the top of Mt. Washington in New Hampshire, nicknamed Home of the World’s Worst Weather. Guilmette was hired to capture video of meteorologists and observers working during the brutal Mt. Washington winter. The footage will be used in the Mt. Washington Observatory Museum that’s due to open summer 2014. 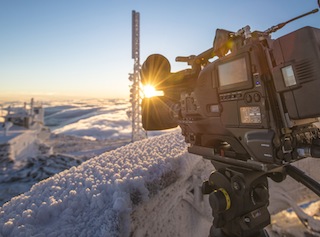 He packed his Vinten Vision 100 support system and ascended by Snow Cat to the summit buildings. Shooting conditions were extreme. Guilmette dealt with high winds and temperatures below -20°F (-29°C).

His 35 lb. (16kg) camera package included a Sony PDW F800 XDCam with a Fujinon 23x lens and Anton/Bauer HyTRON battery, all supported by a Vinten Vision 100 pan and tilt head.

The world’s highest wind speed observed by man of nearly 231 mph was recorded on the Mt. Washington summit in 1934. “With the rock-solid Vision 100,” Guilmette said, “I could put the tripod into a snow drift and shoot beauty shots and B-roll in insane wind that can rip ski goggles right off your face. Using the Vinten Vision 100, I was able to dial in perfect balance and heavy friction to maintain control of my F800 in the artic winds. The resulting shots are smooth and steady showing off the frozen landscape that looks like another planet.”

Guilmette said the high wind element of his extreme weather shooting not only tests the ability of a tripod and head to steady the camera, but also challenges the cold temperature performance of the head. “I didn’t do much to keep the head warm while outside, and I was extremely happy with the buttery-smooth action of the Vision 100, even as the internal friction fluid chilled.”

But with the Vision 100’s wide operating temperature range, from -40°F to 140°F (-40°C to 60°C), he was able to shoot the observatory’s staff working outside and chipping ice off instruments