Grasshopper Film has acquired the U.S. distribution rights to Last Men in Aleppo, directed by Feras Fayyad and co-directed and edited by Steen Johannesen. The film had its world premiere at the Sundance Film Festival, where it won the World Documentary Grand Jury Prize, then went on to screen as the Opening Night selection of CPH:Dox where it won the Dox:Award.

The film was produced by Larm Film and the Aleppo Media Center in co-production with Kloos & Co Medien – with support from the Danish Film Institute & DR and IMR. 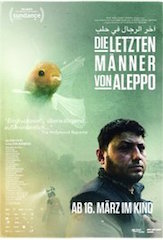 After five years of war in Syria, the remaining citizens of Aleppo are getting ready for a siege. From September 2015 to the fall of 2016, the filmmakers follow the volunteers from The White Helmets as they experience the daily life of death and struggle in the streets of the city. They fight for sanity in a place where war has become the norm.

Khalid, Subhi and Mahmoud are among the first to enter the destroyed buildings, scouring through the rubble in search of bodies and signs of life. They now live more or less under siege and constant bombings, together with the remaining 350,000 civilians in Aleppo. They all struggle with the same dilemma: Should they flee and bring their families to safety, or should they stay and fight for their city?

"For six years, I witnessed the ugliest of human brutality; secret prisons, destroyed cities and streets littered with human remains,” said Fiyyad, “I wanted to find a glimmer of hope and humanity under all this hell. War brings out the worst in human beings, but it also brings out the best in us.  The White Helmets are indeed a living example of that, and their voices deserve to be heard.”

“Last Men in Aleppo is bold, courageous, immersive filmmaking,” said Ryan Krivoshey. “By embedding us among these extraordinary individuals, allowing us to experience their reality, it illuminates in a way that I haven’t seen before a conflict that is reshaping our world. We’re honored to be working with director Feras Fayyad and co-director Steen Johannesen on the release of this film.”

Grasshopper plans to release the film theatrically in May, followed by a non-theatrical and video on demand release. The film will have an exclusive New York run starting May 3 at the Metrograph and May 18 at Laemmle’s Music Hall in Los Angeles with a nationwide rollout thereafter. The film has also been acquired for US broadcast by POV, which will air the film later in the year.

The deal was negotiated by Jason Ishikawa of Cinetic International and DR Sales with Ryan Krivoshey for Grasshopper Film.