The Genius 100 Foundation is joining Cosmic Pictures as executive producers on their upcoming film, Einstein’s Incredible Universe for Imax and giant screens. 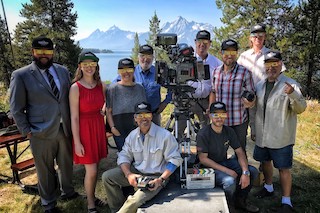 The foundation celebrated Einstein’s birthday March 14, by connecting live to the International Space Station for a private G100 Visionary induction ceremony and conversation with astronaut Dr. Noguchi as he was orbiting the earth. In honor of Einstein’s significant impact on science and space exploration and to celebrate new G100 Visionary Noguchi, filmmakers Daniel Ferguson and Taran Davies of Cosmic Picture, debuted a first look trailer of Einstein’s Incredible Universe during the ceremony.

“It seemed kind of perfect to celebrate Einstein’s legacy and launch this film from the ISS,” said Daniel Ferguson, writer and director. “So much of our current understanding of how the universe works stemmed from questions and thought experiments he explored in his imagination. We hope our film will inspire a new generation of problem solvers to ask equally big questions and exploit the limitless laboratories within their own minds. Thanks to the global collective power of the Genius 100 team, this film can finally become a reality.”

Designed and conceived for the largest screens on earth, Einstein’s Incredible Universe takes audiences on a spellbinding journey through space and time in a way few have ever experienced, revealing some of the strangest phenomena in the known universe - the collision of massive black holes, exploding supernovas and swirling neutron stars – all in stunning, immersive 3D.

The film tracks the work of two astrophysicists who are building on Einstein’s work and putting his theories to their greatest test yet. They are 2020 Nobel Prize-winner, Professor Andrea Ghez, famously known as “the black hole hunter” and Professor Nergis Mavalvala, part of the Nobel Prize-winning team that detected gravitational waves. As they explore Einstein’s radical ideas about gravity, Ghez and Malvalvala guide us through a series of astonishing experiments that are redefining our vision of the cosmos.

One of the highlights of the film is extraordinary footage captured during the 2017 total solar eclipse, nearly a century after a similar eclipse offered the first observational validation of Einstein’s General Theory of Relativity. For this film, 26 cameras captured the event across seven U.S. states, including the most definitive proof of relativity ever captured by amateur astronomers.

“It’s jaw-droppingly astonishing that with little more than his imagination, Einstein was able to see, comprehend and develop his theories – and now more than 100 years later – we are still scientifically evolving based on his work,” said Hilarie Viener, CEO, the Genius 100 Foundation U.S.  “Our entire global community is honored and thrilled to work with and support the team at Cosmic Picture to bring this must-see film to audiences around the world.”

Einstein’s Incredible Universe will be released to Imax and giant screen cinemas in early 2024, prior to the total solar eclipse that will sweep across Mexico, the U.S., and Eastern Canada.