Antonio Lukich, one of the four Ukrainian directors visiting Göteborg Film Festival on a residency stay for three months will be showing the world premiere of his second feature film, the black comedy Luxembourg, Luxembourg at the Venice International Film Festival and at the Toronto International Film Festival. At the same time, the Göteborg Film Fund has opened submissions for development grants for filmmakers working within Ukraine. 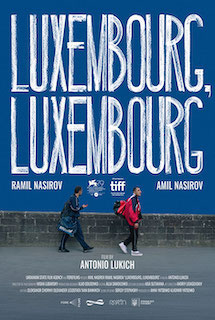 “We are of course very happy to accompany one of our residency guests to Venice and Toronto and celebrate his, and Ukrainian, film at the same time as it is a kick-off for new parts of our program for Ukraine,” says Camilla Larsson, fund manager at Göteborg Film Festival. “We have the goal to keep the industry within Ukraine active as much as possible, under these really tough circumstances

In Venice, Lukich is competing in the official festival section Orrizonti and in Toronto it will be screened in the Contemporary World Cinema section. In addition to the residency, where Lukich is writing a new script, Göteborg Film Fund is supporting the promotion activities for the film, within a cooperation with the Ukrainian Institute and their program proMotion. The film is produced by Vladimir Yatsenko and Anna Yatsenko for Forefilms.

The call for submissions for development grants for filmmakers working within Ukraine is part of a bigger program for Ukraine. The project is supported by The Swedish Postcode Foundation, within the frame of their focus on artistic freedom, and by the Swedish Institute and their emergency support for Ukraine. The development grants, consisting of SEK 75 000 each, are for the development of scripts or projects and supports feature length fiction or documentary films, with a director tied to them. The call is open through September 15.

More information about applying for a development grant is available on the Göteborg Film Festival website http://www.goteborgfilmfestival.se.