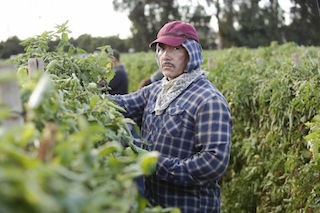 The studio served as the sole visual effects provider for the third season of American Crime, which included numerous 3D set extensions and digital matte paintings. “The series takes place entirely in North Carolina, but was shot in and around Los Angeles,” said Jason Piccioni, VFX supervisor on both Ridley projects. “The lion’s share of the VFX work involved enhancing, replacing, and/or building environments that more closely resembled the landscape, groves, fields, and small towns of our story location.”

Portions of the show were set in a camp housing migrant farm workers. “We built a maze of rundown trailers out at Disney Ranch in Los Angeles and then extended those camps with CG and matte paintings to increase the size of the trailer park and surround it with a landscape appropriate to North Carolina,” Piccioni said.

FuseFX’s contributions to Let It Fall, an in-depth look at the culture of Los Angeles in the years leading up to the 1992 riots, were of a much different variety – one to add critical context rather than shape environments. FuseFX artists created hundreds of animated maps, handwritten notes and titles, and other graphics that are used throughout the film to provide critical information and enrich the narrative.

“By their nature, documentaries tend to include an incredible amount of exposition,” Piccioni said.  “John Ridley was looking for a way to present information cinematically, so that viewers can absorb it without feeling like they’re reading a textbook.”

Piccioni’s team worked with director Ridley, editor Colin Rich (also from American Crime) and art director Manija Emran to design the graphics that matched the texture and language of the film.

“It was fun to do something a little different and still be so integral to the storytelling,” Piccioni said.

Piccioni shared that it was a privilege to work on projects that inspire viewers to relate to characters quite different from themselves. “John has a gift for presenting stories honestly and in a way that causes us to see and empathize with many sides of these situations,” he said.  “The gray area and difficult decisions that permeate these people’s lives are, I think, themes that we can all connect with.”

“Both shows urge viewers to think more deeply about our society and take a closer look at these themes on a national scale,” Piccioni said.  “It’s those challenges that make working with John so rewarding.”