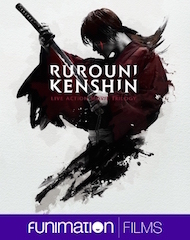 , which has sold more than 70 million copies and been recognized as a New York Times Bestseller. The storyline, set in feudal Japan during the Meiji period, centers on a former assassin Kenshin Himura who must confront a rapidly modernizing society following a fierce war.  Joined by allies along the way, Kenshin faces new villains as he fulfills his vow to protect the innocent.

"We're excited to be working with GAGA to bring this international box office hit trilogy to North America,'" said Gen Fukunaga, CEO and founder of Funimation. "This collection of movies stands out as incredibly authentic film adaptation that faithfully honors the original manga series. We're eager to share Rurouni Kenshin with U.S. audiences in August."

"Fans have been clamoring to see the Rurouni Kenshin film trilogy and we are pleased to finally be bringing it to theaters," said Mike DuBoise, executive vice president and COO of Funimation. "The action choreography and production design throughout all three films is incredible and has to be experienced on the big screen. Fans will not want to miss seeing them."

Funimation Films has released the official, full-length theatrical trailer for the Rurouni Kenshin trilogy. The trailer is available here for viewing through an exclusive partnership with gaming and entertainment website IGN.com.

For more information and updates, visit the official movie website at funimationfilms.com/rurounikenshin