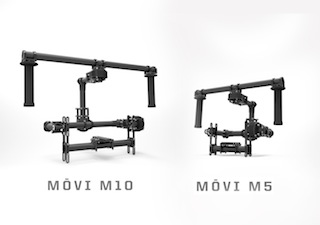 Since its April introduction, MōVI M10 has been used on more than a dozen film, television, and commercial productions and has garnered an incredible amount of praise from high-end filmmakers such as JJ Abrams, Alfonso Cuaron, ASC cinematographers, and dozens of independent filmmakers.

“We’ve been hard at work at Freefly since the launch of MōVI at NAB, incorporating all of the feedback from our field tests with filmmakers and camera operators,” said Freefly’s cofounder Tabb Firchau. “Such production model refinements to the M10 include: widening the camera tray to better accommodate larger camera packages, including the Canon C300 and C500, the RED EPIC with side handle, Canon EOS 1DC, and the Blackmagic Cinema Camera; [the] ability to run somewhat heavier camera packages than we showed at NAB – now up to 12 lbs/5.4 kg; and [a] feature to center balance the camera without tools.”

“I’m completely sold on the MōVI,” said cinematographer Alex Buono, known for his film unit work for SNL. He recently had a chance to try out MōVI’s on a short. “It’s ability to smoothly pan, tilt or roll remotely while it’s being operated allows me the ability to create camera moves that are unlike anything I’ve ever seen and yet are incredibly easy to execute,” Buono said.

For a key shot, the camera operator simply held the top handle of the MōVI down at arm’s length aimed behind him and ran straight forward, “no­ looking” the shot while the remote operator kept the camera trained on a character’s feet and then performed the hard tilt­ up to the actor’s face from his remote control.

“After they nailed the shot on take one, I just stood there with a dumb look on my face,” Buono said. “ ‘Uh...I guess we should do it again, right?’ I asked. So we did another take and they nailed it again. I looked at my watch and realized that at this rate, we were far ahead of schedule which gave me the opportunity to further finesse the shot, and the luxury to create half a dozen shots instead of just one or two – and in a very rare occurrence for many of my shoots – we finished ahead of schedule.”

Freefly was also recently invited to demonstrate the MōVI rig at an American Society of Cinematographers event, where Director of Photography host Kees Van Oostrum, ASC simply stated, “MōVI is the future”.

The new MōVI M10 will start shipping on August 15 on a first-come­-first­-serve basis to customers who have pre­ordered units. New customers can place their MōVI M10 pre­orders now at www.MoviRig.com and in the near future via select dealers worldwide.

Building on its gyro-stabilized M10 camera rig, Freefly Systems also announces a new smaller, lighter, lower-priced MōVI M5, which will begin shipping in the fourth quarter of 2013 for $4,995. The M5 camera stabilizer is sized to accommodate most DSLR sized cameras like the Canon 5D, Panasonic GH2/3, Nikon D800, and Sony A99.

The M5 draws on the advanced stabilization technology developed for the M10 allowing for amazingly smooth footage in even the most demanding situations. The compact form factor and lightweight nature of the M5 allows camera movement that would be impossible in the past. With the release of M5, Freefly aims to bring big budget camera moves to a wider range of productions.  To find out more and place pre-orders visit www.MoviRig.com.