The cloud-based video review and approval platform Frame.io has announced its support for the AWS for Media & Entertainment initiative from Amazon Web Services to accelerate and simplify collaborative content creation with remote production teams, whether they’re shooting on-set, editing from a suite across town, or working in an entirely different city in their own home. 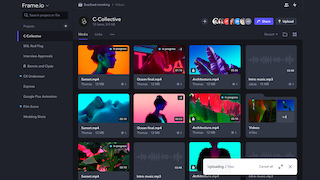 AWS for Media & Entertainment is an initiative featuring new and existing services and solutions from AWS and AWS Partners, built specifically for content creators, rights holders, producers, broadcasters, and distributors.

AWS adds the newly announced Amazon Nimble Studio, a service that enables customers to set up creative studios in hours instead of weeks, to a portfolio of more purpose-built media and entertainment industry services than any other cloud.

In addition to review and approval, Frame.io recently introduced Camera to Cloud, which the company says will revolutionize production workflows. Over the last 100 years production shifted from film to tape, then tape to digital files. Now there’s a third shift — going directly from camera to cloud, which will forever change the way content will be created. In the past, film needed to be processed or digitized, tapes duplicated, drives backed up and media shipped in order for anyone to view the day’s work. It simply took too long. Frame.io Camera to Cloud solves this problem by instantly and securely publishing footage to the cloud so producers, studios, agencies, and even editors can receive and monitor camera files within seconds of calling “cut” on set.

“Frame.io is leveraging AWS in truly unique ways to deliver desktop class solutions with intuitive, beautifully designed interfaces,” said Emery Wells, CEO of Frame.io. “Whether it’s our review and approval tools or our revolutionary new Camera to Cloud features, we’re fundamentally changing the way video is created. In just a few short years, people will wonder how they ever did it any other way.”