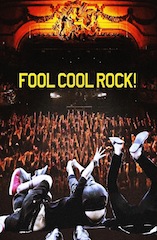 The documentary Fool Cool Rock from director: Hiroyuki Nakano will be mixed and released in Auro 11.1  this month. “I’m so proud that Auro 11.1 by Barco was selected as the preferred sound format for this movie. One OK Rock’s devoted fans will be delighted when they hear this band perform like never before,” said Brian Claypool, senior director of strategic business development at Barco.

Claypool added, “Auro 11.1’s unique approach to realistic immersive sound will recreate the environment of a live concert performance like no other system, and the screams of delight that their fans exhibit at every live performance will blend perfectly with the emotions of the audience in the theater. The Auro 11.1 experience brings an enhanced sense of unity between movie and audience. This film presents an opportunity for us to show to audiences the truly immersive capabilities of the Auro 11.1 format.”

Masao Sasano from Barco Japan’s Entertainment division said, “Auro 11.1 has been installed into 28 post-production studios around the world and this movie is the first Japanese title mixed in Auro 11.1. I look forward to the feedback from audiences worldwide on their experience with this Japanese produced masterpiece.”

Shinichi Takahashi, the movie’s producer said, “According to the experience of a demo at Nikkatsu Studio Center, I decided to mix my film in Auro 11.1. As most of the film shows a live concert, I was particularly impressed with how well the three layers of sound - unique to Auro 11.1 - were able to make the environment of the concert hall reverberate throughout the auditorium, giving a sense of immersion between the live concert audience and the theater audience.”

“Fool Cool Rock! was mixed at the Nikkatsu Studio Center in Tokyo, Releasing this May, audiences will be able to enjoy the movie in Auro 11.1 at multiple locations including the Anjo Korona Cinema World in Anjo city, Aichi Prefecture.

Nikkatsu is not making a special DCP for the Auro version. There is no difference between the DCP for cinemas equipped with the Auro 11.1 system and for other cinemas. A single inventory DCP is created and distributed to cinemas worldwide without distinguishing between 5.1 and 11.1 version simplifying the production and distribution process.