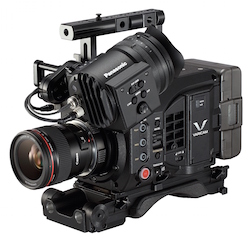 The firmware upgrade (Ver. 7.0) for the VariCam 35 and HS and Ver. 5.0 upgrade for VariCam LT can be downloaded now at this URL - http://pro-av.panasonic.net/en/varicam/index.html.

"After receiving requests from users on high-end episodic productions, we’re offering broader codec support, which will benefit productions during the upcoming pilot season,” said Steve Cooperman, senior product manager, broadcast, cinema and professional video systems, Panasonic. “With an expansion of codecs such as ProRes and AVC LongG, production companies and broadcasters will now be able to simplify their preferred workflows.”

For HD-SDI monitor outputs, users can shorten the delay of the outputs to two frames, greatly enhancing onset monitoring applications. For cinema shooters, there’s new support of 23.98PsF output, which provides native frame rate support without introducing 2:3 pulldown artifacts. There’s also new support for Letter Box output in 4K/2K in which the image in MON OUT will be automatically set in Letter Box mode.

For the iPad, there’s a new remote control app – VariCam ROP – that has a user display similar to VariCam’s menu display. On the app, you can select whether you want Master control in the app or camera, a lock switch to prevent accidental operation, and dial up/down operation by screen swipe on an iOS device.