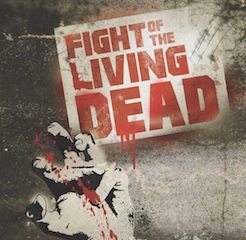 Fight of the Living Dead is an unprecedented mash-up of the reality and scripted genres.  The show follows nine top YouTube stars as they attempt to survive the first 24 hours of a simulated zombie apocalypse. Contestants face challenges in an attempt to eliminate each other from the competition while trying to survive the undead’s relentlessly grisly, and frighteningly realistic onslaught. The series is a groundbreaking case study in transitioning YouTube stars into the larger media landscape by leveraging the massive digital reach of each cast member as well as the subscriber base of the most watched genre channel on YouTube, BlackBoxTV, which recently partnered with Alpine Labs.  With a potential launch viewership base of more than 10 million subscribers, the program is well positioned to take full advantage of all avenues of distribution.

Launching in late 2014, Con TV will feature additional original series like Fight of the Living Dead as well as movies and TV series from Cinedigm’s library of over 52,000 titles, live events and panels filmed at conventions year round. The channel is a partnership between Cinedigm and Wizard World, the largest producer of Comic Con and pop culture events nationally.

“We think Fight of the Living Dead is a killer concept,” says Cinedigm’s Opeka. “The series is a brilliant way to kick-off Con TV’s original programming roster and introduce this innovative crop of talent to new audiences.”

“Alpine Labs’ continuing goal is to find new and exciting ways to challenge conventional entertainment models of production and distribution," says Alpine's Abrams. "Being in business with a creative, forward-thinking, entrepreneurially oriented powerhouse like Cinedigm is for us a match made in zombie heaven."