The fifteenth annual Valley Film Festival has announced its complete line-up and opening night screening.  VFF returns in full force with a five-day festival showcasing 40 of the best independent films, from the valley and from around the world, October 21-25 at Laemmle NoHo7 in the NoHo Arts District. 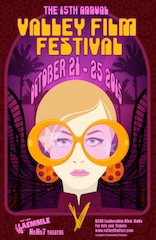 VFF continues to program diverse films from around the country and the world. This year's programs include films from New Jersey to Ohio and Spain to Serbia.

LA Premieres include the feature films: Boned, Congo Beat the Drum, It Plays Like Love, and The Wristwatch. Short films making their LA debut are: As it is in Heaven; A Divinely Twisted Comedy, Blue-Eyed Me, Californication, Fruitcake, It's a Journey, Not a Destination, Number 2: If I Were Marilyn, Omid, Marilyn and I, My Sardasht, Pretty Good Day, and Wings

Tickets are $12 and are available at ValleyFilmFest.com.