Sponsored by Regal Cinemas, Festival of Cinema NYC has opened its call for submissions. The festival, which says it is New York City’s fastest growing film festival, is looking for the best in independent film of all lengths and genres. That includes drama, comedy, horror, sci-fi, fantasy, documentary, experimental, LGBTQ, and animation. 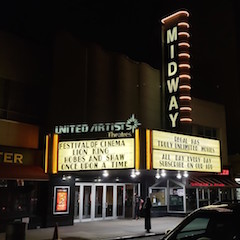 The Opening Night, Closing Night, Midweek Red Carpet Event, and Midnight Madness Grindhouse Horror films are all selected from the very best submissions received. Recently named as one of the top 100 best reviewed film festivals on FilmFreeway.com, the festival’s main objective is to give independent filmmakers maximum exposure by presenting films on grand screens with state-of-the-art sound and projection in the comfort of recliner seats.

Additional screenings, workshops and panels presented at the Queens Library at Forest Hills and the Queens Museum in Flushing Meadows Corona Park, offer filmmakers and guests a world class event showcasing the work of truly independent filmmakers locally and from around the world.

Every filmmaker that submits their film receives a one-year subscription to Videomaker Magazine, a leading subscription service that focuses on guiding independent filmmakers with online tutorials and publications.

As a competitive festival, Festival of Cinema NYC’s jury board includes top industry professionals from Emmy Award winning filmmakers to Netflix producers, who award the best of the festival in more than 15 categories. Prizes from sponsors include a sales consultation, the latest Final Draft software, and an opt-in distribution deal from Indiepix Films.

Save 25 percent off your submission fee when you enter the code Filmmatic2020. The regular deadline to enter is February 10. Click here to enter https://filmfreeway.com/FestivalofCinemaNYC