Fathom Events and Viz Media are bringing Bleach the Movie: Hell Verse to more than 700 movie theatre screens across the country on August 25. 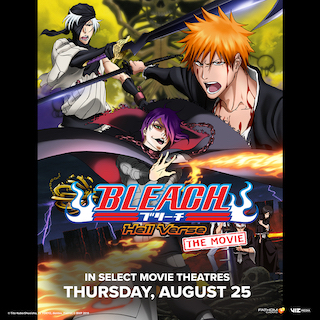 Bleach the Movie: Hell Verse is the fourth animated film adaptation from the popular manga and anime series, Bleach. First released in 2010 in Japan, the film is directed by Noriyuki Abe and its screenplay was written by Natsuko Takahashi and Ookubo Masahiro.

The film's theme song Save the One, Save the All is performed by T.M.Revolution.

Coinciding with the 20th anniversary of the Bleach series, the one-night screening also includes a lvideo featuring SungWon Cho (aka ProZD) and the voice of Bleach's Ichigo Kurosaki, Johnny Yong Bosch, as well as the Hell Chapter Prologue (Bleach episode 299).

As a special bonus, while supplies last, the first 50 people at each location will receive an exclusive Bleach lanyard.

In Hell Chapter: Prologue, while visiting the World of the Living, Rukia comes across Kurumadani, the current Soul Reaper stationed in Karakura Town, being attacked by a mysterious masked man. To her surprise, the masked man reveals himself as Shrieker, the Hollow previously defeated and sent to hell by Rukia and Chad.