Fathom Events is sponsoring the second annual Animation is Film a major animation festival hosted at the historic Mann’s Chinese Theater in Hollywood (TCL Chinese 6 Theater) October 19-21. The festival will kick off with the U.S. premiere of Mirai, from director Mamoru Hosoda, ahead of its nationwide theatrical release from Fathom Events and GKids on November 29, December 5 and December 8. 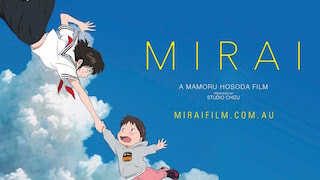 “We chose to sponsor Animation is Film because of their mission to showcase the best works of animation from around the world to their audiences. This aligns with Fathom’s history of bringing top animation titles to passionate fans via the cinema,” said Fathom Events CEO Ray Nutt. “Animation is an important and innately cinematic art form that deserves to shine – and we are always looking for ways to make the spotlight a little brighter.”

“We are very grateful for Fathom's support of Animation is Film and for their commitment to excellence in animation,” said GKids CEO Erik Beckman. “GKIDS has worked together with Fathom on our national animated events for over two years and we are looking forward to clinking glasses with them this Friday for the opening of the Festival!”

Animation is Film is produced by GKids in collaboration with Annecy International Animation Film Festival, Variety, and ASIFA Hollywood. It features a highly selective showcase of the best animated films from around the world, red carpets, filmmaker Q&As, special events, receptions, short film programs, virtual reality lounge, and both juried and audience awards. The festival will also include a four-film retrospective of opening night film director Mamoru Hosoda’s work, who will attend all festival screenings of his work.