Fathom to Screen The Outpost in Select Theatres July 2

Fathom Events, alongside Screen Media, a Chicken Soup for the Soul Entertainment company, will return to theatres with a first-run film this summer with Millennium Media and Rod Lurie’s military thriller, The Outpost, a true story based on Jake Tapper’s best-selling non-fiction book, The Outpost: An Untold Story of American Valor. The exclusive event is scheduled to begin on July 2 on approximately 500 screens, followed by a weeklong limited theatrical run starting July 3. Each screening will be accompanied by a special introduction from select cast members and exclusive behind-the-scenes footage. 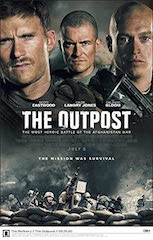 “As we lead into Independence Day weekend, we are honored to partner with Screen Media again, with this being the first of many first-run films on our calendar,” said Fathom Events CEO Ray Nutt. “Screen Media realizes the value and importance of the theatrical experience as much as we do, so it’s a partnership we look forward to continuing.”

“We are thrilled to partner with Fathom Events to bring this heroic tale to theatrical audiences everywhere,” said David Fannon, president of Screen Media. "Independence Day is the perfect time for the country to come back to theaters and The Outpost couldn’t be a better movie for them to come and experience on the big screen.”

The Outpost follows a tiny unit of U.S. soldiers, alone at the remote Combat Outpost Keating, located deep in the valley of three mountains in Afghanistan, as they battle to defend against an overwhelming force of Taliban fighters in a coordinated attack. The Battle of Kamdesh, as it was known, was the bloodiest American engagement of the Afghan War in 2009 and Bravo Troop 3-61 CAV became one of the most decorated units of the 19-year conflict.