In celebration of Black History Month, Fathom Events will present a special encore screening of Terence Blanchard’s critically acclaimed opera Fire Shut Up in My Bones in cinemas nationwide on Saturday, February 12. The monumental production, which was presented live in cinemas on Saturday, October 23, 2021, as part of The Met: Live in HD series, marked the first opera by a Black composer ever performed by the Met. 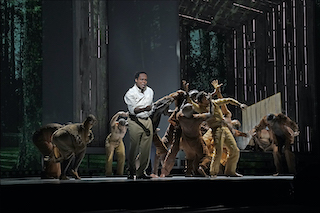 The opera, by Oscar-nominated and five-time Grammy Award-winning composer and trumpeter Terence Blanchard, is an adaptation of New York Times columnist Charles M. Blow’s memoir of the same name.

Featuring a libretto by filmmaker Kasi Lemmons, which marked her first foray into opera, the work tells a profound story about a young man’s journey to overcome a childhood of trauma and hardship. James Robinson and Camille A. Brown co-directed the production, and Brown, who is also the production’s choreographer, is the first Black director to create a mainstage Met production.

Met music director Yannick Nézet-Séguin took the podium to conduct a stellar cast starring baritone Will Liverman, sopranos Angel Blue and Latonia Moore, and 13-year-old Walter Russell III, who made his Met debut in this production.

Fire Shut Up in My Bones received rave reviews after its premiere at the Met:

A watershed moment for American opera … A defiant, tender, and vital work of art … A starting point for something new, a refresh of where opera can take us.” —The Washington Post

“Landmark performance … The evening was a triumph for Terence Blanchard … Beautifully composed with nuances of shade and color … Music director Yannick Nézet-Séguin … brought out a vibrant performance … Walter Russell III, a 13-year-old who played the young Charles, got the biggest individual cheers.” —Associated Press

The encore will be distributed over Fathom’s Digital Broadcast Network as part of The Met: Live in HD series.