Boxing returns to Fathom Events when one of the most anticipated fights in recent boxing history comes to movie theatres this April. 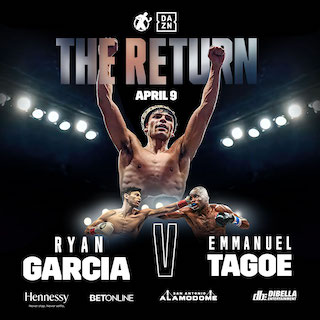 Fathom Events and DAZN will present the lightweight match-up between undefeated Ryan Garcia (21-0, 18 KO’s) against Emmanuel “The Gameboy” Tagoe (32-1, 15 KOs) in a 12-round, lightweight showdown at the Alamodome in San Antonio, Texas live on Friday, April 9 at 8:00 p.m. ET.

This will be the first fight for the 23-year-old Garcia since January of 2021 when he scored a TKO in the seventh round against Luke Campbell. He was then sidelined with a wrist injury before taking time to focus on his mental health.

He will face the 33-year-old Tagoe, in only his second U.S. fight. Tagoe, from Accra, Ghana, has accumulated various championships since his professional debut in 2004, including the IBF International, WBA International, and WBO Africa lightweight titles. He is currently ranked tenth by the WBC and has risen in the division’s ranks since his U.S. boxing debut in 2013 with a ninth-round stoppage of Gerardo Robles.