Fathom Events and the Metropolitan Opera announced an agreement today to renew The Met: Live in HD series, extending a cultural tradition that has delivered scores of performances from the Met's stage at New York's Lincoln Center directly to cinema screens nationwide since 2006. 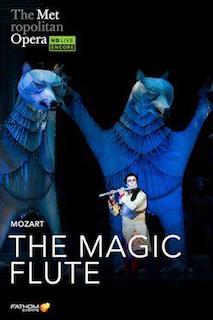 The partnership between the country's largest performing arts institution and leading event-cinema distributor will be renewed through the 2025–26 season, culminating in the 20th anniversary of the Live in HD program. The program renewal demonstrates how live performances can drive the return of audiences to movie theatres following the worst periods of the COVID-19 pandemic.

The announcement comes ahead of the December 10 Live in HD transmission of The Hours by Kevin Puts, based on the novel by Michael Cunningham and subsequent movie of the same title. The Met is presenting the world premiere staging of the work. It is one of seven new Met productions presented in the 2022-23 season, including the opening Live in HD performance, the Met premiere of Cherubini's Medea. The other new productions are Giordano's Fedora; Wagner's Lohengrin; Mozart's Don Giovanni and Die Zauberflöte; and Terence Blanchard's Champion. Blanchard's Fire Shut Up in My Bones, transmitted live to movie screens in 2021, was the first opera at the Met by a Black composer. The HD season will also feature performances of Verdi's Falstaff and Strauss's Der Rosenkavalier.

"The Met is a cultural touchstone and one of the most iconic global performing-arts brands," said Ray Nutt, Fathom Events chief executive officer. "As exceptional and distinctly special is the work that The Met brings to audiences, Peter and his team are just as exceptional. They have been an enormously valuable partner in our own growth at Fathom Events. During the term of this new agreement, we will have been partnered for two decades, and we look forward to continuing to work with the Met to bring more high-quality performances to fans around the country."

"The Met's Live in HD series has brought the beauty and power of opera to millions of people who ordinarily would not have access to it," Peter Gelb, the Met's general manager said. "We are grateful to have such an excellent partner in Fathom and look forward to continuing our shared mission of making world-class opera available to cinema audiences throughout the United States and beyond."

The partnership that began with fewer than 100 theatres has grown to an average of 725 theatres annually and an estimated audience of more than 580,000 annually, widely broadening the reach of The Met's performances. The partnership has seen a total revenue of over $205 million which translates to approximately 10 million tickets sold. Today, Fathom's events with The Met consistently rank among the top-10 in box office on the event date, according to Comscore data, and The Met now accounts for fully half of Fathom Events' live-event box office revenue.