Fathom Events to Present the Documentary Portrait of the Queen

On Wednesday, November 30, Fathom Events will present the documentary Portrait of The Queen in more than 500 theatres nationwide. Queen Elizabeth ll was the most photographed, the most loved and talked about, spied on, praised, criticized, popular woman on the planet. The film is based on the best-selling book Elisabetta II: Ritrato di Regina by Paola Calvetti. 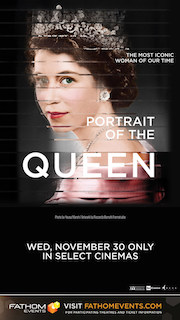 Fathom Events, in association with By Experience, Nexo Digital with RAI Cinema present the original production, which also features a bonus discussion with the film's director, Fabrizio Ferri.

Portrait of the Queen offers an original portrayal of the story of The Queen from a totally new perspective: through the most intense, amazing, revealing photographic portraits of her, as shared by the extraordinary photographers who accompanied and often created the image of the British monarchy itself.

Special focus is given to each of The Queen's most intense, intimate, faithful portraits, symbols of 20th century history, contextualized by the photographers who portrayed Her Majesty –Brian Aris, Jason Bell, Julian Calder, Chris Levine, David Montgomery, and John Swannell.

Each portrait presented in this film, each conversation with the photographers involved in the project, all the accounts of experiences shared by actresses, designers, and British subjects, fit carefully and intricately into the screenplay like pieces of a mosaic that capture some of the multifaceted aspects of the Queen's image, all different but connected, all equally powerful and significant.

Said director Fabrizio Ferri, "In a lifetime working as a photographer I have taken many photographs of important and famous people: actors, musicians, dancers, models. But the most complete, comprehensive portrait I have ever done, surprisingly, is not a photograph: it is this film, Portrait of The Queen. Gathering different perceptions of the image of the Queen in the words of her subjects, in those of the celebrities that worked on this project, of the great photographers and artists that actually portrayed her and told us their stories, I have built, just like a pulsing puzzle, a truthful and emotive portrait of Elizabeth II, The Queen."