Fathom Events has named seasoned film critic and sports and entertainment correspondent, Ben Lyons, as the official host of Fathom Events. Marking a first for the award-winning distributor of alternative content to cinemas, Lyons will engage audiences in person, providing a historical retrospective on the evolution of cinemas and appearing in Fathom’s original pre-show content. 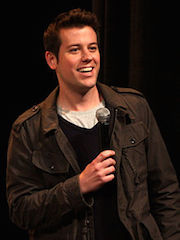 As the new brand ambassador, Lyons will also present a monthly series reporting on recent Fathom Events and will host and curate Q&A’s and special live events.

“Fathom is providing something truly unique for audiences and I’m thrilled to be a part of their evolving entertainment platform,” said Lyons. “Passionate film, sports, and entertainment fans can experience the content they love in a whole new way with Fathom’s diverse programming lineup.”

“Fathom has always celebrated industry personalities and with Lyons’ experience covering pop culture and his enthusiasm as an entertainer, we’re able to bring our fans a more immersive experience,” said John Rubey, CEO of Fathom Events. “Ben is an entertainment expert and a dedicated fan, which speaks to the core of Fathom’s brand.