Everyman and partner Jaguar recently presented a special immersive event and screening of the film Babylon at the four-screen Everyman Crystal Palace. The venue was transformed into a dazzling cinematic experience, transporting 300 guests to the hedonistic world of Hollywood in the 1920s. 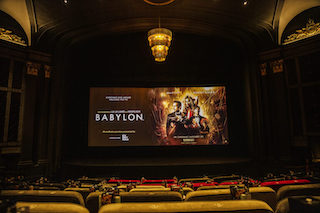 To capture the exuberance of the time and bring to life the outrageousness of Babylon, the immersive event included a live performance piece from The Twins Prendergast, featuring dancers inside and outside the venue, acrobats, showgirls and a 10-piece jazz band, Perhaps Contraption.

The fully immersive party also included a 1920s Babylon tasting experience, with special canapés and cocktails all themed around the glitz and glamour of the era. To tie this memorable event together and create an extra special, luxury experience, VIP guests were chauffeured in Jaguar’s fully electric I-Pace vehicles.

Adam Reynolds, head of brand partnerships at Everyman said, “At Everyman we believe that cinema is all about creating memorable experiences, and we are excited to be able to create a campaign that blurs the line between film and reality. Experiential [events] like this really highlight the power of cinema and the endless ways brands can get in front of their target audience.”

The UK cinema advertising company Pearl & Dean brokered the long-running partnership between Jaguar and Everyman, a relationship that has been extended until early 2024. The ongoing partnership has provided Everyman’s highly engaged and loyal audience with an array of experiences such as film premieres, preview screenings, meetings with talent, live music performances, outdoor cinema events and new venue openings, all powered by Jaguar.

Catherine Ferguson, head of agency strategy at Pearl & Dean said, “The Everyman Jaguar partnership is one that we are incredibly proud of and events such as these showcase what can be achieved through a truly collaborative relationship.”

Everyman and Jaguar are set to launch more campaigns throughout 2023, including the sponsorship of Everyman Screen on The Canal located in King’s Cross.