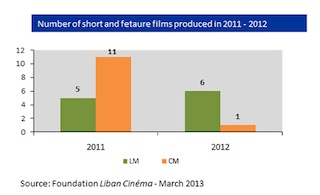 The Euromed Audiovisual III program of the European Union and the European Audiovisual Observatory are publishing a report on film and audiovisual industry in Lebanon. This report is third, after reports on Egypt and Morocco, in a series of country profiles prepared under the data collection project on the audiovisual and film sector in the 9 partner countries.

Like the previous reports, this country profile provides a comprehensive overview of the various economic aspects of the film and the audiovisual sector in Lebanon (television, on-request services), and makes a description of the institutional and regulatory framework and of the level of development of telecommunication infrastructure (TNT, ADSL television, broadband networks, mobile telephone).

In addition, the report offers available data on different aspects of the film market (production, distribution and operating of Lebanese films, coproduction, 2012 box office and rate of admissions to Lebanese films in Europe (1996-2012). It draws on collected information from public institutions, professional organizations, private information sources and published information in the press.

The richness and diversity of the Lebanese film and audiovisual sector are highlighted:

With 15 multi-cinema facilities, 94 screens and 16,499 seats, Lebanon has the largest operating infrastructure in the region. In five years, 15 Lebanese films were distributed in the European Union, making 1.4 million admissions.

The persistence of film censorship in Lebanon (which is being debated and is even the subject of a satiric television series) is a factor of weakness for the Lebanese industry and hampers opportunities of growth in Europe. The ban, in April, of L’attentat, by the Lebanese film director Ziad Doueri, selected in 19 international festivals, is the latest illustration.

Reports on Morocco, Egypt and Lebanon were prepared by Dr. Sahar Ali, Media Expert - Euromed Audiovisual III, under the supervision of Dr. André Lange, Head of Department for Information on Markets and Financing (European Audiovisual Observatory, Council of Europe, Strasbourg).

The report may be downloaded from the websites of Euromed Audiovisual and the European Audiovisual Laboratory. Two other country profiles, on Jordan and the Occupied Territories are being drafted and will be published in the summer. They are available on both organizations’ websites.