Eikona Cinema has released an automated brightness level handling feature set for its theatre management system that the company says enables films mastered for multiple brightness levels to be screened correctly in every auditorium. 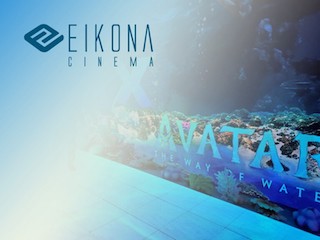 The new feature was rolled out in advance of one of the year’s most anticipated blockbuster releases, Avatar: The Way of Water, the sequel to James Cameron’s Avatar, the highest grossing film of all-time.

Historically, DCPs with 3D versions of feature films varied only in their aspect ratios (flat, scope or full container) and possibly their audio type (5.1, 7.1, Atmos, etc.). With the adoption of high and variable frame rates for certain titles, and the requirement to master such content at different brightness levels, the number of versions of any given release has increased exponentially. The need to properly manage all the different versions of a film within each cinema efficiently and with as few resources as possible was the objective Eikona Cinema had in developing their automated brightness level handling feature.

“When we heard about all the versions that might be created for the Avatar sequel that might be distributed because of [high frame rate] and [variable frame rate] we knew we had to come up with a solution for our customers to manage them all,” said Eikona Cinema CEO Joachim Schmitt. “We were excited that we were able to develop the feature, test it extensively in the field and get it distributed ahead of the film’s release. Now for any title moving forward that is mastered for multiple brightness levels, our TMS is ready to handle it.”