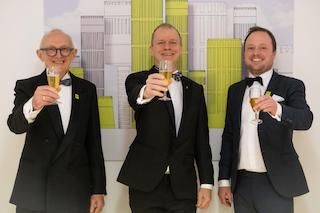 The pair’s accomplishment is among 17 scientific and technical achievements to be honored by the Academy of Motion Picture Arts and Sciences in a virtual Scientific and Technical Awards presentation on February 13. The ceremony will be available on the OSCARS website starting at 1:00 p.m. PST.

The Academy’s Scientific and Technical Awards honor those whose discoveries and innovations have contributed in significant and lasting ways to motion pictures. First developed by Stockholm in 1996, DPA’s 4060 Omnidirectional Miniature Microphone continues to be a preeminent solution for sound designers and film sound engineers around the world.

Since its development, DPA has expanded its miniature microphone into a complete product line, which also includes the 4061, 4062, 4063 and 4071 miniature mics, as well as the 6060 and 6061 subminiature mics. Each solution is tailored to a specific application based on sensitivity, voltage and placement needs. Recently updated to include Core by DPA technology, the miniature microphones feature increased audio clarity and openness, minimized distortion and expanded dynamic range.