The winning films in the Dolby Institute x Ghetto Film School Filmmaker Finish the Script Challenge were screened late last month in separate events in Los Angeles and New York. The winners are Alejandra Araujo of Jamaica, New York for Shipped Out; Eleanor Cho of Artesia, California for Dinner is Ready; Antonio Salume of Mexico City, Mexico, and Amy B. Tiong of Waterbury, Connecticut for Take Care Zora; and Christian Osagiede of Los Angeles, California for Hunted. 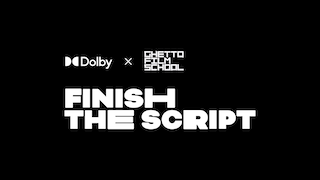 The Dolby Institute launched the program in collaboration with Ghetto Film School to support emerging filmmakers from underserved communities. The winning scripts were chosen last September and the filmmakers spent the ensuing months completing their films.

The winning projects each received a $25,000 grant to fund the production costs of their short films, as well as mentorship throughout the production process from Estrada. 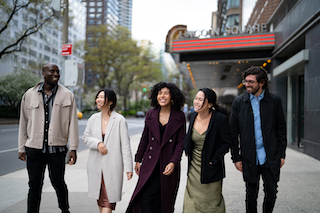 In addition, a Dolby team helped provide inspiration and guidance to the winners on how to best use the color of Dolby Vision and the immersive sound of Dolby Atmos to complete their projects.

Both screenings were followed by a panel discussion with the filmmakers.

Here are brief descriptions of the winning films:

Alejandra Araujo’s Shipped Out is an animated short tale that takes place in a dystopian future and touches on immigration, abuses of power, and the strength of family. A native New Yorker with Colombian roots, Araujo is a graduate of NYU’s Tisch School of the Arts and works as a director and editor. 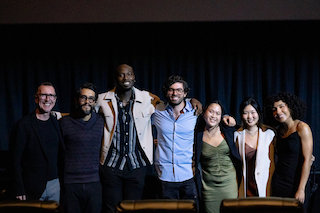 With Dinner is Ready, Eleanor Cho has served up a story that mixes together the love between mother and daughter, the power of food to bring us closer together, and grief. Cho is a Korean-American filmmaker who drew inspiration from her immigrant parents’ hardships to create stories of those underrepresented in film.

Take Care Zora shows both the hardships and joys of raising someone with Down syndrome while also weaving in the coming-of-age story of one of the caretaking siblings. Inspired by the work ethic of her immigrant parents, Amy B. Tiong is a graduate of NYU’s Tisch School of the Arts where she was a Dean’s Scholar. She currently works as a producer's assistant and at Vice Media Group. Antonio Salume grew up in Mexico and has been a visual storyteller since childhood. Also a graduate of Tisch, he now works as a director, writer, and producer.

Mining the horror genre Christian Osagiede’s Hunted, tackles the difficult emotions of fear, disgust, and envy. He uses the surreal, grotesque, and macabre to explore the intimate relationships of his characters. A Nigerian-American filmmaker, Osagiede grew up with a love of all things genre and surreal. After graduating from Stanford University, where he majored in Black Diaspora and Film Studies, he moved to Los Angeles and started working as a production assistant on commercials and films.