Documentary on Student Debt to Screen at July Film Festival

Scared To Debt: Sallie Mae Not, chapter one of a feature documentary film by Michael Camoin, takes an investigative and historical look into public and private issued student loans and the debt crisis facing more than 45 million American borrowers today. Sallie Mae Not premieres virtually on July 26 at 1:00 pm on Film Festival Flix Livestream presented by the Whistleblower Summit and Film Festival taking place July 23 through August 1. 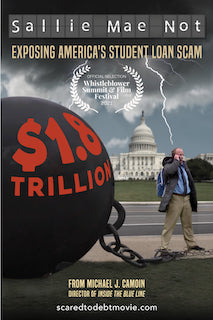 A free panel discussion with the filmmaker and whistleblowers will follow on July 26 at 4:00 pm.

According to the latest data from the Federal Reserve, government-issued student loan debt has nearly tripled in size from $600 Billion in 2008 to more than $1.7 trillion in the past year. It is estimated that the 45 million US student loan borrowers collectively owe nearly $1.8 trillion. That is ten percent of the national debt, making student loans the second-highest consumer debt category behind mortgages today. Nineteen U.S. states’ citizens hold student loan debt that exceeds their home states’ annual budget.

In Scared to Debt: Sallie Mae Not chapter one, Rolling Stone magazine’s contributing editor Matt Taibbi meets Alan Collinge, a dedicated stalwart who turns from scientist to activist when he is wrongfully thrown into default by Sallie Mae. Collinge, the film’s main voice, is an activist and author of The Student Loan Scam: The Most Oppressive Debt in U.S. History, and How We Can Fight Back who claims, “The US Government has run this unconstitutionally predatory lending system to catastrophic failure at this point. There is no saving it.” 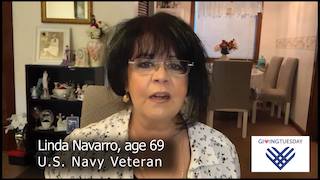 Sallie Mae Not links Congress’s 1998 decision to remove standard consumer protections from student loans such as bankruptcy and statutes of limitations, to the problem. This shifted the burden solely onto the borrowers, mostly teenagers and their parent/guardian co-signer. For some now baby boomer borrowers, they remain in debt well into retirement, having much-needed social security wages garnished.

U.S. Navy veteran Linda Navarro, featured in Sallie Mae Not, borrowed $20,000 thirty years ago, has made payments all those years and she still owes $214,000. Incidentally, there are more people over the age of 50 than under 25 with student loans, and they owe more than triple what the younger group owes. Many borrowers like Ms. Navarro feel it is a far cry from the original Higher Education Act of 1965 where President Johnson stated loans would be given at little to no interest “to strengthen the educational resources of our colleges and universities and to provide financial assistance for students in post-secondary and higher education.”

This year’s Whistleblower Summit + Film Festival theme is Salute to the 50th Anniversary of the Pentagon Papers and the Rise of Investigative Journalism. Keynote presentation by Daniel Ellsberg and panel discussions from the Watergate era journalists, academics and whistleblower advocates including panels hosted by the Society of Professional Journalists, Justice, Integrity, and the Government Accountability Project.