The Walt Disney Studios will release four upcoming titles in CJ 4DPlex’s multi-sensory 4DX format. Following the successful global release of The Lion King and Aladdin in 4DX, Maleficent: Mistress of Evil will be released in October, followed by Frozen 2 and Ford v Ferrari in November and Star Wars: The Rise of Skywalker in December.

Maleficent: Mistress of Evil in 4DX will follow the flying motions of Maleficent as she soars across the kingdom of Ulstead and the Moors. Adding to the experience will be scents and water, enhancing the landscape, plus fog, motion and vibration, to enhance all the fantastical battle sequences. 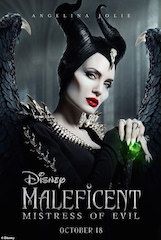 Frozen 2 in 4DX will feature the snow effect to enhance the winter theme, and as the adventure leads Elsa, Anna, Kristoff and crew away from Arendelle, 4DX will also add rain, fog, wind and scents highlighting the journey into new lands.

Ford v Ferrari in 4DX will capture the rapid swerves and turns of two legendary race cars – the Ford GT40 and the Ferrari P33 – zooming across the speedway through 4DX motion and vibration, plus heave, pitch and roll mimicking the thrilling and unpredictable drifting and braking motions. 4DX will intensify the breakneck speed and adrenaline of the racing sequences in the legendary showdown between Ford and Ferrari.

Star Wars: The Rise of Skywalker in the motion enhanced seats of 4DX will take audiences to a galaxy far far away mimicking the sense of spacecrafts blasting into hyperspace with 4DXs perfectly calibrated motion design.

As light sabers swish and zing in battle, 4DX strobe and vibrations will highlight the sensations during all the battle sequences in this conclusion to the epic Skywalker saga.

“We are incredibly excited to be collaborating with The Walt Disney Studios to release Maleficent: Mistress of Evil, Frozen 2, Ford v Ferrari and Star Wars: The Rise of Skywalker enhanced in the multi-sensory 4DX format,” said CJ 4DPlex CEO JongRyul Kim. “We are thrilled to be canvassing a multitude of genres and giving audiences a varied 4DX cinematic experience covering sci-fi, fantasy, action, animation, and drama. This is a fantastic lineup leading into the end of the year introducing more of CJ 4DPLEXs next-generation cinematic experiences.”