Digital Theatre to sell Merrily We Roll Along Online 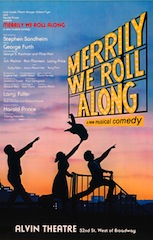 On December 22 Digital Theatre will make Merrily We Roll Along available to purchase online. The show was recently awarded the Ned Sherrin Award for Best Musical at the 2013 Evening Standard Theatre Awards.

Maria Friedman’s revival of Merrily We Roll Along was the first production in Digital Theatre and CinemaLive’s West End Theatre Series and has been screened in more than 1,000 cinemas around the world. Countries that took part in the series included the UK, USA, Canada, Ireland, Australia, New Zealand, Germany, Sweden, Israel, The Netherlands and Russia. With music and lyrics by Stephen Sondheim and book by George Furth, Merrily We Roll Along transferred to the West End’s Harold Pinter Theatre following a sell-out run at the Menier Chocolate Factory.

Speaking about the upcoming release, director Friedman said, "It is wonderful that Digital Theatre has enabled the production to extend its life beyond its stage run. I was honored that Merrily We Roll Along was chosen to be the first in their West End Theatre Series, screened in over 1,000 cinemas around the world, and to see it available online for people to keep forever is just thrilling."

Merrily We Roll Along received more five-star reviews than any other musical in West End history and won the 2012 Critics’ Circle Award for Best Musical.

Starting in 1980 and travelling backwards in time, this powerful and moving story features some of Sondheim’s most beautiful songs including Good Thing Going, Not a Day Goes By and Old Friends. Triple Oliver Award-winner Friedman makes a thrilling directorial debut with this vibrant, full-scale production with an exceptional cast led by Mark Umbers, Jenna Russelland Damian Humbley. Digital Theatre works in partnership with Britain's leading theatre companies to capture live performance authentically onscreen from multiple camera angles and makes productions available to a worldwide audience in high definition.

Recent Digital Theatre releases include the 2011 Olivier Award-winning revival of Stephen Sondheim and James Lapine’s Into the Woods at Regent’s Park Open Air Theatre. The Public Theater later transferred the production to New York’s Central Park in the summer of 2012.

Other productions include: the Almeida Theatre’s production of King Lear starring Jonathan Pryce, Long Day’s Journey into Night starring David Suchet and Laurie Metcalf, Much Ado About Nothing starring David Tennant and Catherine Tate, Royal Shakespeare Company productions of The Comedy of Errors and As You Like It, the multi award-winning A Doll’s Housestarring Hattie Morahan for the Young Vic, the West End revival of Jonathan Harvey’s seminal Beautiful Thing and Frantic Assembly and Abi Morgan’s Lovesong.

Customers are invited to register for updates on the Digital Theatre website from today www.digitaltheatre.com.