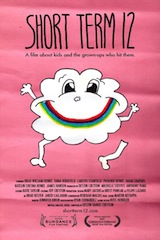 Demarest Films and Cinedigm have entered into a co-acquisition and distribution to create a new co-acquisition and marketing arrangement that should greatly expand independent film acquisition, marketing and distribution opportunities for both parties. The first collaboration will be Destin Daniel Cretton’s 2013 SXSW Film Festival dual Grand Jury and Audience Award winner Short Term 12, which will be released theatrically August 23r, with ancillaries following in early 2014.

“We have been looking for ways to work with Sam and William since they formed Demarest Films.  We are thrilled they felt as passionate about Short Term 12as we did and are very happy to bring them in as partners on this powerful film,” said Chris McGurk, chairman and CEO, Cinedigm. “This arrangement is truly unique as it’s not a traditional distribution or production relationship – it’s a fully-fledged partnership that allows us to share equally in the upsides of our indie films, from theatrical all the way thru the vast ancillary opportunities our distribution expertise and infrastructure provides. It’s great to be working with such an innovative team and this arrangement should expand acquisition opportunities for both parties in the future.”

“Cinedigm is on the cutting edge of the independent film renaissance and we are thrilled to be partnering with them and tapping into the vast potential that digital distribution provides,” said Sam Englebardt, co-founder and CEO, Demarest Films.  “Short Term 12 is a great initial project as it’s not only a strong, award-winning film with beautiful performances, but we also believe the long tail ancillaries of this project will be significant.  We expect this to be the first of many films that we co-release with Cinedigm and a model that we are excited to replicate with other distribution partners as well.”

Short Term 12 is the story of Grace (Brie Larson) a twenty-something social worker who has channeled the demons of her own troubled past into a passion for helping at-risk teens. Her newest ward, Jayden (Kaitlyn Dever), forces Grace to relive her own difficult upbringing just as she and her boyfriend Mason (John Gallagher Jr.) are on the cusp of making a decision that will change their lives. This is writer/director Cretton’s second feature following the 2012 Sundance Film Festival selection I Am Not a Hipster.  The film also features Rami Malek and newcomer, Keith Stanfield.