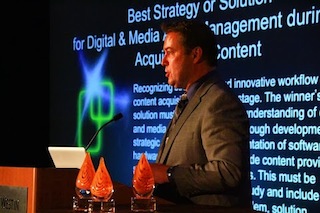 McDonald’s, Best Buy Canada, the Alstom Group and Simian are among the winners of the 4th Annual DAMMY Awards, Createasphere’s competition for excellence in digital asset management. Announced as part of Createasphere’s Digital Asset Management Conference and Exhibition in New York City, the DAMMYs are the premier award in the digital asset management industry, recognizing pioneering individuals and organizations for outstanding achievement over the past 12 months.

This year’s DAMMY competition attracted the most diverse group of participants in the history of the event. Participants competed in four categories recognizing innovations in security, workflows and new revenue streams, as well as for DAMMY of the Year, recognizing an outstanding individual who “exemplifies forward-thinking, leadership and innovation.” Judging was conducted by a blue-ribbon panel led by Fran Alexander (BCA Research), Lisa McIntyre (GSD&M), Jeff Lawrence (Celerity) and David Riercks (ControlledVocabulary.com).

“This year’s DAMMY winners represent the highest level of dedication and professionalism, and each one has made significant contributions that will have an impact on the industry for years to come,” said Createasphere president Kristin Petrovich Kennedy. “We are very pleased to honor these individuals and organization and are grateful to everyone who helped to make the 2013 DAMMYs an outstanding success.”

Createasphere's 2014 Digital Asset Management Conferences will be held in Los Angeles in March and New York City in October.