Creative editors Brian Sepanik and Keith Kristinat of the Colonie recently received top honors at the 2016 AICE event, earning the editorial and post house the distinction of taking home the most awards of any Chicago-based company at this year’s presentation. 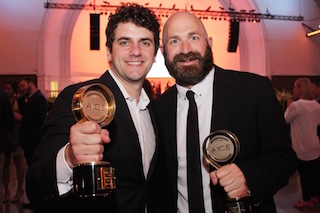 Sepanik edited GrubHub’s :30 live-action/CGI spot while helming The Colonie’s team of visual effects and motion graphic artists. The humorous storyline pits two co-workers against each other in a fast-paced game of ping-pong with high stakes – the winner gets to decide what they will order for lunch.

The editor spent three days rough cutting the footage and then worked remotely with Jay, collaborating on the final version. The main challenge Sepanik faced was timing the movement of the fast-paced ping pong paddles so that they hit the ball just right – and coming up with some innovative solutions to cover numerous timing issues, while taking a few liberties and letting the sound design carry some of the action.

Kristinat, garnered The Colonie’s second AICE win for his skillful crafting of director, writer, producer Martin Rodahl’s heartfelt two-minute video, ‘Dependable.’ The spec spot follows the story of an adult son reflecting on his relationship with his father and the adventures that they’ve shared over the years.

Rodahl senior is behind the wheel of his old Chevy truck as they head out.  Confident in his father's ability to provide everything needed to ensure a safe expedition, Martin catches a nap as the unpredictable weather takes a change for the worse.

On the drive back, Martin takes the wheel of the Chevy, as his dad sleeps in the passenger seat. The director’s voiceover brings home his story’s message: ‘I have all of these amazing memories thanks to my dad – so whenever I look at him now I feel like it's time to return the favor.’

“Martin came to me with three days’ worth of beautiful Norwegian countryside footage. The kind of footage you don’t get on a daily basis. It was an embarrassment of riches,” says Kristinat. "However, it was the voiceover that he recorded – and the simple, poignant personal story that needed to be the focus of this spot. Having lost my father the year before, I had a strong connection with his message.”