4DX Recliner is a motion base that can be added to existing recliners, offering a more comfortable and private movie watching experience to audiences. This enables exhibitors to repurpose auditoriums with existing recliner seats by adding a 4DX motion base. The motion base comes with three movements of heave (up and down), roll (left and right) and pitch (tilt backward and forward) with an additional option to add swing and yaw movement (twist left and right). 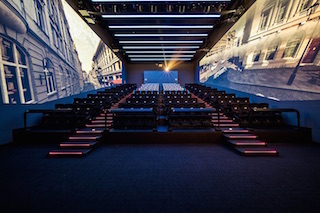 4DX VR Racing is a multiplayer driving simulator that allows up to sixteen players to race against the clock and go head-to-head in real time.

4DX VR Disk is a groundbreaking motion platform and interactive VR technology taking virtual reality to a whole new level. The 360-degree rotation motion along with the addition of the interactive gun-shooting component provides an amazing replay value for players to return to again and again.

4DX VR will bring additional revenue opportunities by allowing patrons to experience lobby entertainment systems, either before or after they watch a feature film.

4DX Flying Cinema, which debuted last year as a prototype, features individualized motion seating that will hang from multi-level floors inside the auditorium. With the option to swivel and swing, and sync to the action on screen, 4DX Flying Cinema will offer optimized viewing angles and an incredibly dynamic viewing experience.

“With the many challenges that are currently facing theatrical exhibition, innovation is more important than ever, and is at the core of CJ 4DPlex’s vision,” said CEO JongRyul Kim. “4DX and ScreenX technologies have been rapidly reshaping the industry standard and laying the groundwork for a bright future for exhibition around the world, providing exhibitors with new revenue opportunities and giving moviegoers a highly-engaging premium experience that inspires them to return to the theatre again and again.”

CinemaCon, which convenes April 1-4 at Caesars Palace in Las Vegas, is the official convention of the National Association of Theatre Owners. CJ 4DPlex will be exhibiting in the Roman Ballroom I, Promenade Level at Caesars Palace.