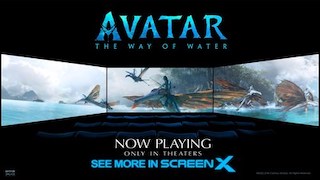 Avatar: The Way of Water box office highlights across the CJ 4DPlex network include:

4DX's highest domestic opening weekend ever with $1.87 million on 59 screens

In Avatar: The Way of Water audiences experience the lush lands of Pandora in ScreenX's visually immersive panoramic format with 58 minutes of exclusive story enhancing imagery on over 350 screens worldwide.

4DX's multi-sensory technology submerges audiences into the action of the film by utilizing over 21 unique motion and environmental effects and is available on over 780 4DX screens worldwide.

"Avatar: The Way of Water showcases premium formats in a way no other film has done prior,” said Don Savant, CEO and president, CJ 4DPlex America. "James Cameron, 20th Century Studios and Lightstorm Entertainment have created a magical world that is heightened with premium cinematic experiences like 4DX and ScreenX."

Avatar: The Way of Water continues to play globally in 4DX and ScreenX theatres.